Fritchley is a hamlet in the parish of Crich with a population (in 1931) of between five and six hundred. It is a typical Derbyshire village of small square stone built houses strewn about on the eastern slopes of the hill, with two or three picturesque farm houses among them. The road down from Crich is very steep. It passes an old primitive Methodist Chapel, and a school, goes down what is known as “Mutton Row”, and arrives at the “Green” which is just a patch of grass crossed by some paths, with out trees, or a pond or geese or any of the graces of the villages in the south.

Around the Green are small stone houses with well-kept gardens, a Congregational Chapel and some shops. From the Green there go; Allen Lane leading back to the main road (Bullbridge Hill), Chapel Street, a short street leading past The Friends Meeting House and the Post Office; Front Street which joins it and goes down Bobbin Mill Hill and up the other side of the valley to Barnclose Farm and Wingfield Park; and Bowmer Lane which runs past the allotments. 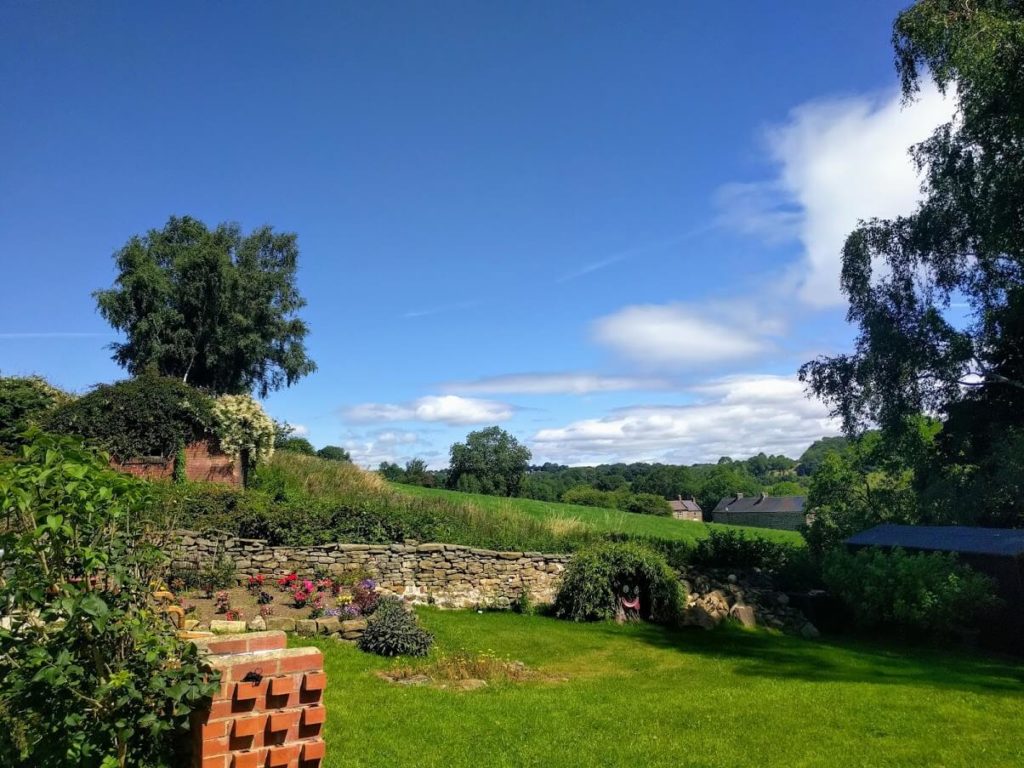 There are some rather quaint place names in Fritchley; Top Hagg and Bottom Hagg are two foot-paths once cart tracks leading down to the canal side both can be reach direct from the house. Hagg is old Danish meaning a way. Chadwick Nick speaks for itself when one sees the pass at the top of the hill but who was Chadwick? (Chadwick, so the story goes, or rather Colonel Chadwick, according to Farmer Julian of Bowmer’s Rough farm which is close by the Nick, was a Civil War, Parliamentary soldier who had his men cut through Chadwick Nick while they were waiting, camped in the fields above Whatstandwell to attack Wingfield Manor during the conflict).

Corner Pin a group of cottages near the old chapel (now demolished). Mutton Row (since condemned but reprieved because of the second World War and the shortage of houses after; now are sort-after dwellings), which lead down to the Shoulder of Mutton Inn (it closed on the 19th of Jan 1971 and the sign was taken down three days later). Some have suggested that it should be renamed Church Row (now called Church St, the name Mutton Row has dropped out of fashion since the end of the war, but the older villagers take delight in keeping the name of Mutton Row alive); but nobody (in 1931) seemed to want it altered. Bobbin Mill Hill will always remain although the mill as long gone. Bowmer Lane was called after the first owner of the ‘Old Farm’ on the right not as normally supposed by the recent family of Bowmer’s that lived in the farm on the left in the valley (now owned by the Lockwood family).

Although, Fritchley was mentioned in the 14th century its story really relates from the 16th century and the reign of Elizabeth (1st) and its traditional founding as a village belongs to a time after Mary, Queen of Scots was a prisoner at Wingfield (Manor). A large number of retainers were employed to wait on the Queen and about this time one of them bought some land at Fritchley and built a cottage. It is believed that the retainer was a descendent of the de Frechville’s who wanted to return to the village named after his ancestors. The house that he built is still standing today; it is the little old cottage opposite the lane by the “Shoulder of Mutton”. His name was FRITCHLEY.

As to the original name of “Fritchley”; the local belief in 1931 was that the place was called after the de Frecheville family. With there being no proper surnames in the 14th century; ordinary men were known as “son of somebody or other and landed families were called after their estates. During the 14th century Fritchley is mentioned in connection with the sale of land when William de Wakebridge established his chanceries in 1363.

This website uses cookies to improve your experience while you navigate through the website. Out of these, the cookies that are categorized as necessary are stored on your browser as they are essential for the working of basic functionalities of the website. We also use third-party cookies that help us analyze and understand how you use this website. These cookies will be stored in your browser only with your consent. You also have the option to opt-out of these cookies. But opting out of some of these cookies may affect your browsing experience.
Necessary Always Enabled
Necessary cookies are absolutely essential for the website to function properly. These cookies ensure basic functionalities and security features of the website, anonymously.
Functional
Functional cookies help to perform certain functionalities like sharing the content of the website on social media platforms, collect feedbacks, and other third-party features.
Performance
Performance cookies are used to understand and analyze the key performance indexes of the website which helps in delivering a better user experience for the visitors.
Analytics
Analytical cookies are used to understand how visitors interact with the website. These cookies help provide information on metrics the number of visitors, bounce rate, traffic source, etc.
Advertisement
Advertisement cookies are used to provide visitors with relevant ads and marketing campaigns. These cookies track visitors across websites and collect information to provide customized ads.
Others
Other uncategorized cookies are those that are being analyzed and have not been classified into a category as yet.
SAVE & ACCEPT